The Commission consists of seven members appointed by the Board of Selectmen for three-year terms.  Rules of Procedure

Meetings are regularly held on the third Thursday of every month at the Belmont Mill or outside at the Bandstand,   Please check posted agendas as is subject to change as necessary

The Belmont Heritage Commission was founded by citizens at the 2004 Town Meeting.  Under New Hampshire law RSA 674:44-b as a Land Use Board, we promote recognition, protection of the unique historic and cultural resources of Belmont, and also integrate preservation planning as a partnership with individuals, businesses, Town boards and other appropriate groups.  (Adopted by the Belmont Heritage Commission on January 13, 2005)

Heritage Commission members are educators both retired and current, parents of Middle School children whose ancestors date far back into Belmont history,  a long standing member who in younger years  lived in Washington D.C. and shares her historical background, and three members who live in homes dating back to the 1800’s, one most recently restored. And we welcome our second Belmont High School Student Representative Victoria Riberio to our commission consisting of  Vicki and Jack Donovan, Priscilla Annis, Claire Bickford,  Ben and Jill Rolfe along with Sonny Patten (ex officio) respectively. 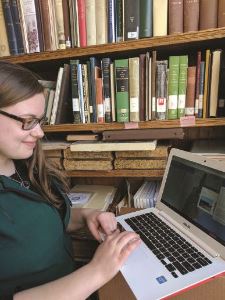 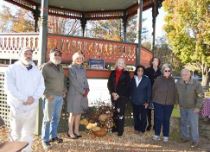 The Belmont Heritage Commission, John M. Sargent Fund and Friends of the Bandstand are sponsoring several upcoming events at the Village Bandstand. 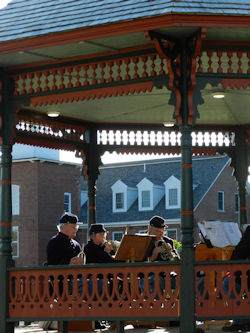 THE HERITAGE SERIES opened at the Belmont Village Bandstand on June 6th. The 12th NH Regiment was featured, playing to more than 70 people. From left are Mike Swift of Gilford, Janet Travis of Derry and Mike Mikuski of Deerfield. The honored guest was "A. Lincoln,” Jim
Miller of Canterbury, who arrived as the band played "Hail to the Chief” for the residential lookalike. New energy efficient lighting now illuminates the structure for performances and safety, and was designed and installed by Michael Marsh of Norm Marsh Electric.
Concert sponsors were the Heritage Commission, John M. Sargent Fund and Friends of the Bandstand. For upcoming schedule see www.historicbelmontbandstand.org.
The Heritage Series opened at the Belmont Village Bandstand on Saturday Citizen 6/10/15 Courtesy Citizen Photo
First Heritage Series concert brings Civil War music to the bandstand  Winni Echo 6/11/15
Civil War commemorative band playing in Belmont on Saturday evening  Daily Sun 6/4/15

At the May 11, 2009 joint meeting of Selectmen, Planning Board, School District and other municipal committees the Heritage Commission recommended the establishment of an ad hoc committee appointed by the Selectmen for Village Revitalization.  The Selectmen, at the request of Heritage Commission representative Cormier, supported that recommendation on May 20, 2009.  The Commission’s active support of this important community initiative continues and is reflected in many of the projects and events listed below.

In 2011, the inaugural New Hampshire History Week was ceremonially noted in Belmont with accolades for volunteerism and excellence by the Heritage Commission’s creation of the first annual "Community Heritage Awards” recognizing exemplary initiatives that foster Belmont Heritage.

As Ronald Cormier, Vice Chairman of the Selectmen and representative to the Heritage Commission said, "The people and projects recognized represent hundreds of hours, care and visibility for our heritage.  These awards are well-deserved and overdue."

First coordinated in 2008, this annual Christmas season event brings community members together to creatively decorate and prepare the Village for the Holiday Season. The event includes both indoor and outdoor activities for all ages.

2008 was Belmont's premiere participation in the Nation's largest day of volunteering.  This now annual community effort has included planting over 1,500 spring-blooming daffodils in special community places including Sargent Park and at the Library and Veterans' Monument.

Bandstand Centennial - a Day to Remember in Belmont.  In 2009 the community celebrated this historic landmark with Councilor Ray Burton commenting that the historic Bandstand "is a reminder of community care and heritage...in its setting near the Tioga River and the Belmont Mill, it remains a symbol of identity and pride in the very fabric of your Town". Executive Councilor Ray Burton

Introduction & Update, May 2009  - Progress & Priorities - a presentation to Selectmen, Planning Board, Conservation Commission, Shaker Regional School District leadership and others.